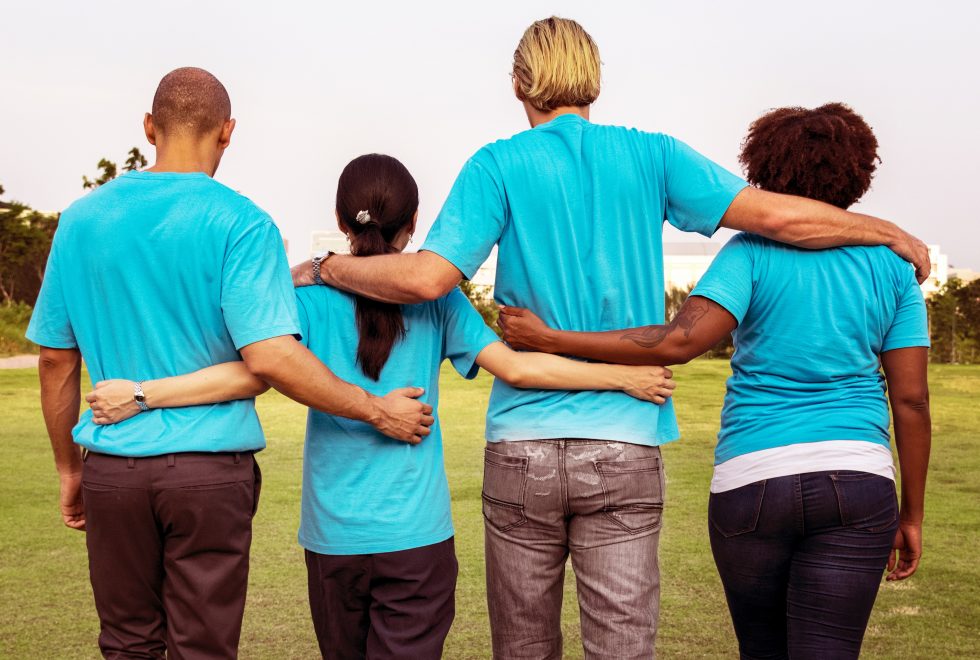 They only make up 5% of the population, and many of them are unaware of their superpower.

This is not the same as a person who has empathy for another.

Being an “empath” is a special gift.

Definition: An empath is a highly intuitive person who is able to sense feelings, moods, tension, and other unspoken details of a person’s personality or disposition.

Empaths are the natural helpers and support system in the universe.

You may be one if:

It took me a long time to figure out that I am an empath.

Before I realized this I just thought I felt things more deeply than other people and that meant something was wrong with me… that my emotional control switch was broken.

Before I was aware of this rare superpower in myself (which a coach helped me to navigate and grow through) my life was a rollercoaster of emotion and included many moments of “why me?”

There are different stages in an empath’s journey, and I look at it as a continuum because depending on the person, fluctuation happens.

I’m about to walk you through the three points on that continuum, and I’ll start at the bottom of the barrel because that’s where I started on my own personal journey of discovery. 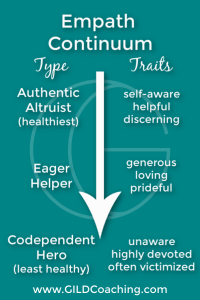 An empath who is unaware of his/her natural ability has a pathological drive to help others.

Because of the lack of awareness around their actions, their “help” may not be seen as help at all.

Their help may be viewed as “butting in” or over the line; they’re not intending for this to happen… it’s a result of their lack of awareness.

This is where I started.

For much of my life I was admonished for “butting in” to other people’s business; all the while I would wonder why people weren’t appreciative of my well-intentioned assistance.

The co-dependent hero version of an empath often becomes victimized by narcissists and I was no different.

The problem with this type of empath is that with the lack of awareness comes an obsessive quality; it’s how people with unhealthy neurological conditions (such as narcissism) can so easily become parasites and suck the empath dry.

The co-dependent hero often presents him or herself as a victim because he or she truly feels that way, and may possibly be right.

They also have major abandonment issues; usually, their abusers (who the empath truly wants to help/save/rescue) leave them when the empath has nothing left to give.

This is the darkest life of an empath, and for these people, awareness is an incredible gift.

Only at that point can they move up the continuum to the next level.

This person has more self-awareness of his or her empathic abilities but does not have the boundaries in place or understanding to completely control them.

Like the co-dependent hero, the eager helper feels as though helping others is either a duty or is just “how things are” – a natural tendency and “gift” they cannot control.

It’s controllable… we’ll get to that part soon.

The eager helper is a good person, generous, and has a big heart who lacks the discerning ability to choose when to use his or her superpowers for good, so may end up in the same boat as the co-dependent hero now and again with people who don’t appreciate the “help.”

Empaths really do want to help, and at this level have some awareness but not the depth of understanding to control how much they “let in” or “let out.”

I remember once during this phase of my journey as an empath I was having problems with something and asked a friend to step in and help stand up for me; her response was that she understood, but did not feel it was her battle to fight.

If the tables were turned, she wouldn’t have even had to ask me for help… because I would just follow that natural tendency to “do it anyway.”

At this stage, the empath doesn’t realize that other people don’t have what they have, so they can still fall prey to that abandonment fear and feelings of victimization.

The eager helper needs to dive deeper in a spiritual way to uncover the discernment that is possible; until then a sense of pride can get in the way and result in negative consequences.

This is the stage in which an empath is unable to mentally separate himself or herself with the situation they’re involved in… even if the situation is not about them.

It’s the opposite of my friend’s response to my request for help; she exhibited healthy boundaries by saying “it’s not my fight;” whereas an empath believes any fight he or she feels or becomes aware of is their fight because they are the center of the solution, or at least can drive toward one.

Empaths at this stage have poorly defined boundaries. (Get a health check of your boundaries with our free assessment here)

This person can become highly resentful if their help is refused.

That’s a long way from the top of this totem pole… the bright light at the end of the empath’s tunnel:

This type of empath has deep self-awareness (that the other types can develop with focused effort) and is the healthiest place to be on the continuum.

The authentic altruist is fully aware of the gift they possess and is in control over when to use it; this person understands that utilizing their gift is a choice instead of an uncontrollable natural phenomenon.

Farther down the spectrum the other empath types are crushed when their help does not yield their highest expected results.

The authentic altruist is much better balanced than that, and selects when to give help with the knowledge that he or she can only do what is possible for him or her to do… and the outcome does not rely entirely on that action.

As someone who has gone from the unhealthy end (co-dependent hero) to the healthy end (authentic altruist), I can honestly say I am grateful for my gift.

If you have an empath in your life but are not one, please understand:

Next week I’ll give my “Empath Survival Guide” for my beloved 5% of the community and their companions.

Companions of empaths need this information just as much as the empaths themselves because your life includes the ups and downs of this incredible gift.

I don’t feel like I have to give this help; I’m giving it because I choose to… it’s part of being an authentic altruist.

Often people ask why I always offer so many freebies including free sessions.

Grab yours with this link.