The Way You Make Me Feel…

“No one can make you feel inferior without your consent.”

Recently during a new client’s first session – during the part when we’re spelling out the lay of the land professionally so I have an idea of the landscape, familiar faces, etc. – I got a picture of an entirely dysfunctional workplace.

The people in the workplace did not speak to each other in a professional manner, feelings were brought into things far too much, and there seemed to be more tattle tailing in that environment than on a kindergarten playground.

After getting a strong hold on the major players in this client’s life, we dove into her reactions.

She wanted to redirect the conversation to everyone else’s missteps.

I challenged her, “I’m not coaching those people, and we cannot control the actions of those people. I’m happy to talk with them if they’d like to explore coaching, but at this moment I’m purely and solely concerned with you, my partner in this relationship.”

So much of this conversation revolved around the way these co-workers made her feel.

What she said to me is that the other person said or did something at or to her that “made her feel” a certain way. 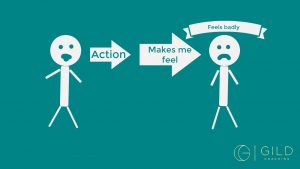 That indicates she has zero control over her feelings.

My suggestion is that the first two arrows are completely out of our control, but that she’s labeled the second one incorrectly. 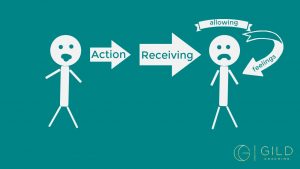 Shifting the “made to feel” arrow to “receiving” – because that’s something that is out of our control – opens the opportunity for her to allow (or disallow) the event from “making her feel” any particular way.

She expressed that it “made her feel” – I’ve suggested she allowed it to make her feel.

We are always in control of our feelings.

With that in mind, look at this slight alteration: 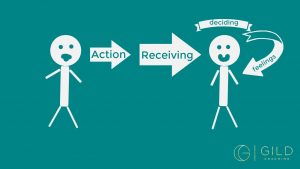 Switch the banner to “deciding” and it empowers us to decide whether a person can or cannot impact our feelings.

I’m not attempting to Suzy-Sunshine this issue; however, you do have a choice.

I realize it’s not going to be positive if someone yells at you or calls you an unkind name.

I am saying that you – and I – have the power to decide whether the message that’s been given to us is valid, and then decide what to do with it.

A hypothetical example: If someone were to call me lazy, I’d receive the message.

Everything that happens after that would be entirely up to me.

Understanding I have the power to control my own feelings and I’m the only one who can affect them, I process that in this way:

I know that I’m not lazy; I’m a very hard worker and accomplish a lot; however, if a person has experienced a different perspective, from where that person stands it may be true in his or her universe.

That’s an easy hypothetical for me to draw up because I’m not sure anyone in the universe would accuse me of that fault.

A real-life example came home in my daughter’s head one day.

My little girl (her name is Holland) has corkscrew-curly hair.

Because it tangles so easily (and is so painful to untangle) lately she has developed the practice of either wearing it braided or in a pony-tail.

One day after school the spring was out of her step when she walked to the car. I knew something was wrong.

“Hey sugar-pop, what was the best thing about your day?” I asked.

“I don’t know, but a mean sixth grader kept pointing at me and saying I was a frizz-head,” she replied.

We talked about this a bit. I asked a few clarifying questions about the “mean sixth grader” including what her hair looks like.

It’s reported that she has long straight hair that sometimes looks greasy.

“Do you think perhaps she wishes her hair were not so flat and greasy looking, and for that reason, she may be a little envious, and that dark envious feeling is expressed by being mean to someone who has the exact opposite of what she dislikes in herself?” I asked.

Holland was allowing this mean-spirited child’s inappropriate comments to impact her mood to the point that she was unable to recognize anything positive about her day.

We discussed why this was a decision only Holland could make, and that the mean girl’s words were like seeds, and her brain is like soil.

“You can decide to let them sit there where you’re aware of them and where they may possibly take root, you can plant them and let them sprout hatred and negative self-talk, or you can recognize them as trash and throw them away.”

Only you can control your feelings.

The words of others have no meaning unless you give them meaning.

If this is a problem for you, here’s a little infographic for you to right-click and save – print it out and put it somewhere in your office or otherwise where you’ll see it and will remember your three choices when it comes to receiving messages and what to do with them. (If you want better resolution, email me.) 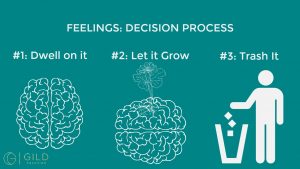 Here’s a link to GILD Coaching’s free Boundaries Assessment so you can check your health in this area.

Live well, take deep breaths, and let us know if there is anything I or any of GILD’s coaches can do for you!