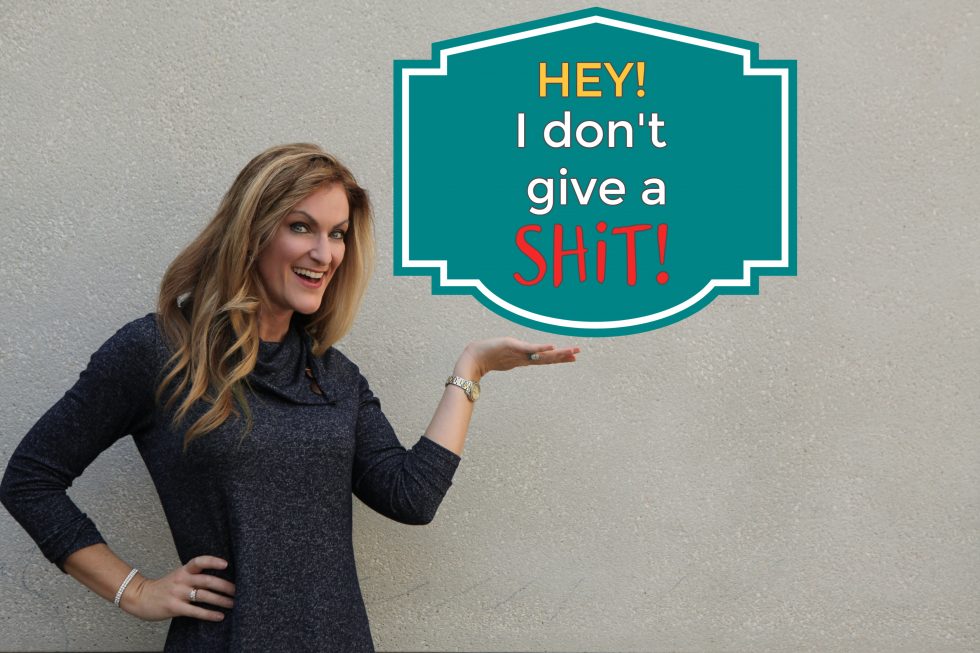 The Gift of Not Giving a Shit

Anxiety & Stress / Communication / Health & Wellness / Mindset
I used to really care what everybody thought about me.
I obsessed about it.
I thought about it all the time…
Every decision that I made was based on what I thought other people would think about it.
It was a really uncomfortable way to live.
I didn’t realize at the time…
But…
The more I speculated about the opinions of others, the less I was in touch with the opinion of the one that actually matters in my life… Myself.
Maybe my bad habit of always looking to the outside for approval came from the fact that I had a mom who was always comparing what we had to what other people had…
Or what she perceived other people to have.
That’s much more accurate.
What’s the difference between what other people have and what you perceive other people to have?
It’s the difference between reality and perception.

…but that doesn’t mean it’s a good view of reality.
In one of our YouTube videos last year we told a story about a young woman who seemed to have everything.
She had a husband who adored her…
They were wealthy… She was always traveling all over the world… her husband spoiled her… She always had jewels and the best cars… So what was the problem?
The problem is all of that wonderful stuff that everyone who follows her on Facebook thinks she has is not what was actually going on in her life.
She was portraying the kind of life that other people would envy.
She was living what some people think is a far off dream for them.
The reality of the situation was nothing like what you would think were you simply following her Instagram account.
She was barren…
Desperately –desperately- wanting a child.
…miserable that she couldn’t have one.
So her husband showered her with jewels, though his cruelty was unimaginable.
He verbally abused her, verbally abused her family, was mean to her… but only when no one else was looking.
Of course, you can imagine, he was always smiling and charming whenever a camera pointed at them.
Come to think of it, maybe that’s why she was so dedicated to posting on her social networking accounts…
Maybe having the camera pointed at him all the time gave him less of an opportunity to be cruel?
Perhaps…
The whole point of this is that my former habit of worrying about what everyone else thought kept me in a pattern that was my own personal jail just like this friend of mine had a pattern of creating a facade that made her life look seemingly perfect from the outside.
My jail wasn’t quite as luxurious as her jail was.
My jail was also one of perception, though.

I was so good at hiding it in my own family didn’t even know…
A couple of my siblings still do not believe all the horrors of my former home & marriage.
…and for what?
So people wouldn’t think a certain way about me?
I lived like that for just a couple of years… but still, much too long.
Why did my friend live like that for a decade?
She and I were so caught up in caring about what you or anyone else thought about us that we were willing to place ourselves in unhappy, uncomfortable, and in my case physically dangerous positions just to save face.
Where did it get either of us?
What did it get either of us?
She ended up on the other side with some pretty sweet jewelry but… Totally not worth it!
I ended up with the one thing she wanted but never got… A precious child.
I’m so thankful for that child… She’s physical proof that good can come out of even the darkest of situations.
That’s what we can at least see you looking backward…
But what were we seeing at that moment?
What were we saying during the time when we had the opportunity to make the decision to do something else?
What was it each day or minute month, year… that made us stay in misery- sacrifice our personal worth for your potential positive opinion?
One word.

Fear of rejection.
Fear of judgment.
Fear of the unknown…
Fear of falling into one of the categories of people that we had judged in the past.
Oh… That one hurts.
That one is so painfully true for me.
I’ve been so judgemental of other people and different types of situations… Divorce, single parenthood, whatever.
I personally felt like a fool for being in a marriage that was barely even out of the newlywed stage and having it already “fail“ that I was willing to stay in an abusive situation just so people wouldn’t think that I was a failure!
How ridiculous is that?
I even failed at failing!
Just as my friends marriage eventually crumbled, so did mine.
I’m very thankful that mine was a lot faster than hers was.
Both met the same end, though.
And now with both of us on this side of the situation, I see that to some degree both of us have developed the beautiful enviable talents of simply not caring.
That’s not entirely accurate… We care! I promise we do.

We just no longer care what you think.

No offense.
I hope that something that you could look me in the eye and tell me as well. That you don’t care what I think.
I hope that you don’t!
aside from the fact that my thoughts and feelings are absolutely not of your business as yours are absolutely none of mine, what really would it matter to you if I happened to think that you were a complete buffoon?
What difference would it make in your life?
My guess is… Not much!
As I exited my façade of a “marriage” I was both surprised and extraordinarily grateful to find a community of people who were not at all judgemental as I had been.
I was met by grace and love of a wonderful group of people at a church I’ve started to attend.
It was a church that some people had questioned my belonging to because I was a single mom without very much by way of physical belongings or net worth… and the church was known for having a fairly well-to-do congregation.
The church is also known for an incredible divorce recovery program… and that’s how I ended up there.
It doesn’t really matter why or how I ended up there… just going with the victory and not caring what those people thought!
It took that one moment of daring to own who I was to help me realize that only by owning who I am would I ever be able to be happy.
Only by owning who I truly am… Authentically… the true me… would I be able to step out on my own.
…Start my own business.
…Be a person I would be proud to know.
After the people who questioned my participation in that church community saw me going there, do you know what happened?
Nothing.
They had voiced their opinion and then they were done.
They didn’t have a huge dogmatic issue with the church.
It was just their perception that people at that church were of a different financial bracket than I was.
While from one vantage point that was true, from another it was most definitely not.

It was simply their perception.

That perception formed from seeing luxury cars in the parking lot and knowing that a great deal of the families had children enrolled in high-dollar private schools.
I don’t believe at the time I made the conscious decision to not care what these people think.
I think I was so desperate for comfort and so exhausted from the trauma that I did not have the energy to argue, and I simply showed up at the group for divorcing and recently divorced people.
Even though it wasn’t bravery that got me out of my pattern of caring about what everyone else’s opinion is of me, it set the stage for me to begin my journey of not caring.
That is… Not caring about things that don’t matter such as other people’s opinions.
Once I saw how wrong those people were about the type of members who attended that church, I realized what I had been doing.

I had put myself in a box.

The sides of the box were built with my own perception (false impressions) of the truth.
The box was taped shut by other people’s echoing similar false impressions.
For me, all it took to break out of that pattern was a super low point in my life and to see that other people’s limitations would have made me miss out on something huge.

What’s the point of all this?

I’m hoping that you can learn a lesson here and if you are living in a world in which you feel as though you have to be constantly building up aside… Please get a pair of box cutters and rip open the tape on your box!!
Do your best and master the art of not caring.
It feels so incredibly liberating, and you can do it if you can manage to understand who you really are.
If you even know that at this point…
Join our GILDed Life group to surround yourself with people who are focused on their journey of growth and authenticity… who are well on the road to not giving a shit about the things that don’t matter… and owning everything else that does.