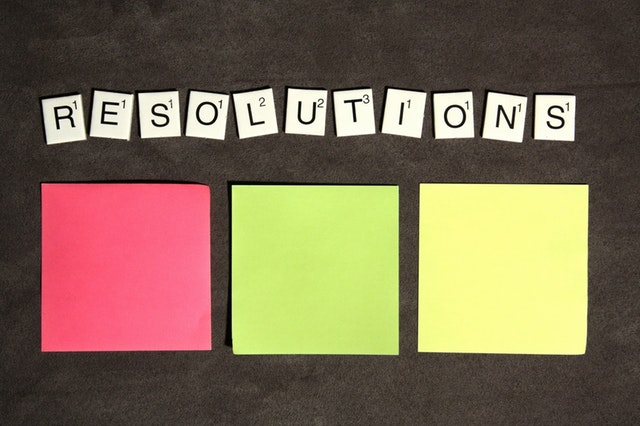 Resolutions Made the Right Way

Here we are again – during the resolution breaking season.

I know, I know… for someone who is such an optimist – a ‘power of positive thinking’ person, that was really a negative thing to say.

So many people get to the end of the year and create ideas that will completely change their lives to make them the ideal version of themselves… and then immediately fail.

The problem with that failure is that it not only sends the failed-resolution-keeper into a cycle of negative self-talk, it programs your brain to expect failure.

An 8-year-old foster child who has lived with us came to us with a very negative disposition.

She couldn’t swim, couldn’t ride a bike, and had never been to a movie.

Immediately after she joined us we started giving her all of those experiences.

We got a bike for her – two, in fact, because I bought the “right-size” for her the first time.

If you’ve never ridden a bike before and you’re an 8-year-old with an above-average height it’s intimidating to be on a bicycle that is the “correct size” for your body.

So we got her a smaller one with training wheels.

We immediately got a membership to a gym with year-round swimming pool access, and her first movie experience was at an IMAX with popcorn and the works.

We were checking off all the boxes.

She was on her way to living a full childhood with a family that loves and supports her.

The problem was it all could not transpire quickly enough for this little girl.

She was experiencing things quickly – I’ve heard this “too much at once” activity level referred to as “drinking from a fire hose.”

We were trying to make sure that as new experiences were introduced they were done so with the right timing and preparation.

She wanted it all to come at once.

I kept reminding her that the last eight years of her life are in the past, and the only moment she has is the present; she can’t “learn how to ride a bike” at the age of four or five as her elder siblings did.

She passed that point already.

…but she could learn now.

She couldn’t take swimming lessons as a preschooler as her elder siblings did.

She passed that point already.

…but she could learn now, and she was… very slowly.

This child is bright and intelligent with a gymnast’s build; she’s very strong-willed and also has a lot of physical strength.

She was ready to not just learn how to swim, bike, and do many other things – she wanted to do so at record speed.

She wanted to speed up her learning curve.

The bicycle we got her which looked like it was a size too small for her body was exactly the right size for her frame of mind.

Training wheels came on it; the salesman at the bike store informed my husband that this was a “training bike.”

She got on the bike and was extremely reliant on the training wheels.

She wasn’t even trying to balance.

I would encourage her after one or two-second bursts of no training wheels on the ground, but then she’d just go back to having them do the balancing for her.

This went on for weeks.

She was not improving.

When she would ride down our long, flat driveway she would approach the end and take far too sharp a turn at far too fast a pace to successfully complete it and she’d topple over.

“Claire, you’re extremely coordinated. I know you can do this,” I encouraged her.

“I just have really bad balance. I think I can’t ride a bike,” she informed me.

We exchanged these same thoughts several times over those weeks and the weeks to follow.

My response was the same each time, “If you think you can’t, you’re absolutely right.”

She talked about how poor her balance was several times.

I asked her why she thinks she has a bad balance and she said that for her whole life different people told her she had bad balance.

“Do you think you have a bad balance?” I asked her.

“If so many people say I do then I must,” she reasoned.

She decided she was tired of falling over off of her bike so she didn’t ride it for a while.

Failure was a theme of her life and she wasn’t going to knowingly invite more.

During that no-bike period of time, Claire enjoyed our large yard, playing with our pets, climbing the beautiful Japanese maple tree we have in the front yard and was especially fond of jumping on the trampoline.

I taught her how to do a front walkover and she attempted several other gymnastics maneuvers which she enjoyed.

One day as I was watching her out of our sunroom windows, she started doing handstands on the trampoline.

I had not taught her this.

Her two hands were on the trampoline, and two feet were in the air… for several seconds at a time.

I began to count: one, two, three… she’s still up… four, five six… I can’t believe she’s holding this… seven, eight, nine… I was never able to hold a handstand on the unsteady surface of a trampoline… ten, she fell over.

She did it again.

Finally, I walked out to her.

“Mama! Did you see me do a handstand? Watch!” she excitedly yelled.

She came down from her next handstand with a huge smile on her face.

“Hey, Claire… I want to tell you something,” I started and she lost her smile thinking she was in trouble for something (kids who have been tossed around the foster care system are always on high alert for things they’ve done wrong because they haven’t been told many things they’ve ever done right).

“You’re not in trouble… I just want to tell you something that I think you don’t know,” I tried to soothe her worries.

She gave me the go-ahead for sharing and I told her, “People with bad balance can’t do handstands, especially on trampolines.”

I wish I’d taken a picture of her adorable little face when that truth landed for her.

If all of the truths that people had told her about how poor her sense of balance is were true, how did she do a handstand?

She couldn’t reason it out immediately.

It was as complicated as a riddle to her because something she was told by several people during the course of her entire life was just proven to be wrong.

…and there was no turning back.

I smiled at her and turned to walk back inside the house, hurrying into my home office so I could watch her out of the windows with shutters so she would not know I was watching.

She sat still on the trampoline for several minutes and then started bouncing a lot and singing something to herself.

I didn’t talk with her about balance again until a few days later when I saw her back on the bike riding up and down our long, flat driveway.

She was giving it another try.

I went outside to watch her and noticed she was not leaning on the training wheels as much.

“Claire, I think you’re ready for me to raise those a little bit more. What do you think?” I was testing her confidence.

I got a wrench and raised the wheels, then watched in amazement as I realized she didn’t need them anymore at all. 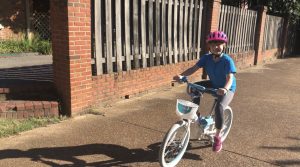 Thinking that the thought of that at this time may be too much for her, I didn’t introduce it to her but did let her know that when she was ready for her bike to not have training wheels anymore all she had to do was ask.

It only took another day.

The training wheels came off; there were a few spills after that which is completely natural, but not many.

Claire confided in me, “You know, Mama, I think I have good balance after all.”

“Claire, what’s the bigger lesson here?” I challenged her.

She thought for a minute and then asked me for the answer.

I obliged, “Even if you hear something from several people – that doesn’t make it true. You decide your truth.”

Now it looks as though she has been riding bikes for years instead of just a few months.

My question to you is: what was the difference?

I’m always saying mindset is everything.

With just a few seconds of her hands on the ground and feet in the air, one false believe was entirely dashed.

She had resolved to do something she didn’t really believe she could do.

While she continued to believe that resolution to be impossible, she failed.

She was absolutely right; she could most certainly not balance well enough to ride a bike.

Until she believed she could.

And she keeps on doing it.

What does this have to do with you and resolutions?

If your mindset is not in line, you can’t have actions that are aligned with your resolutions (or goals).

By one week into the new year, more than half of resolution-makers have begun to doubt their abilities.

Most new year’s resolutions are broken by the end of the first month of the year.

But they don’t need to be.

Work on your mindset.

There is absolutely no excuse if you don’t know how because the GILD team is here to help and will give you a breakthrough session.

All you have to do is ask – just schedule it.

Many people ask me, “Why do you give free sessions when you’re so busy?”

One session is most likely not going to be life-changing for anyone.

What I’m doing is helping individuals who are serious about turning a corner find their next space of growth… that’s when the hard work starts.

Click here if you’re ready and willing to put in the work.

Don’t worry about your resolutions… as a team, we’ll figure out your game plan together.