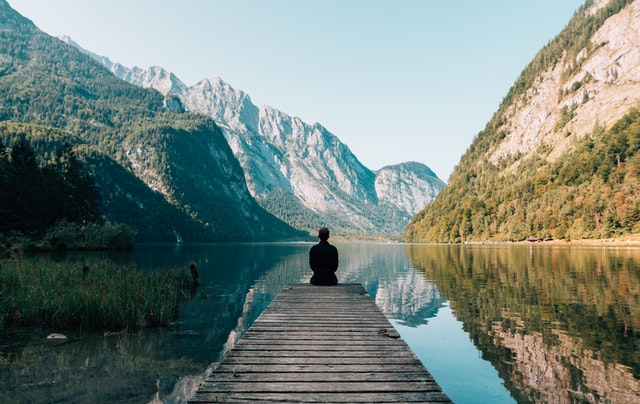 How to Instantly Reach a State of Calm

When you’re feeling anxiety sometimes it feels like the world is crashing in on you.

Anyone who has ever experienced a panic attack will tell you that it is incredibly uncomfortable and sometimes terrifying.

Anxiety disorders are the most common mental illness in America impacting nearly 20% of the population according to the Anxiety and Depression Association of America.

It’s highly common for people who suffer from anxiety to also experience depression, and vice-versa.

Less than half of the people diagnosed with these disorders seek treatment for them.

The rest either finds natural coping mechanisms, live in misery, or end their lives.

This edition of The GILDed Blog is focused on the first of those three options.

Nothing offered to you here is intended to take the place of medication or the advice of a licensed therapist or physician.

That said, natural anxiety-controlling techniques help our clients and millions of other people live with these conditions more comfortably than without.

The physiological answer to this is that it’s a form of excitement.

The big difference between excitement and anxiety is the mindset of the person and the context of the situation while these heightened sensations are experienced.

If you’re experiencing the physical sensations associated with excitement or anxiety right before going on stage before 5 thousand people and you have stage fright, you’ll associate them with anxiety.

If you experience them right before going on a rollercoaster and you love rollercoasters, you’ll associate the same physical sensations with excitement.

Both of these feelings indicate your body’s natural response to some sort of stimulation in your environment.

It becomes counter-productive when it’s out of control and stands in our way of living out our purpose.

How to Calm Anxiety

The biggest issue I witness regarding people who have anxiety and want to reduce it is… it’s a catch 22.

Then, the negative self-talk soundtrack starts, and it fuels the fire.

The quickest way to reduce your anxiety on the spot is deep belly breathing.

I heard this for years before it made a difference in my life and that’s because I didn’t know how to breathe.

Most people don’t know how to do it.

I made this really poor quality video for my clients and am sharing it with you so you can learn how to breathe correctly.

That may seem like a strange thing to communicate to you because you’re breathing right now, aren’t you?

Yes, most likely; however, the vast majority of people who have made it through adolescence (and some before that time) have forgotten how to breathe properly.

So, check this out and please don’t judge me on the video quality.

The first step in getting out of this vicious cycle is developing a positive routine for your day – something that will be easy, quick, and that you can do seven days a week.

It’s not as hard as it sounds, and it’s certainly not complicated.

I’ve written a two-blog series on this and put together an e-book to guide you through the process.

Here’s a link to one of the blogs where you can find several tools including that e-book.

The key to calming anxiety is teaching your brain how to be calm.

Think about it- we are not trained for calmness.

We’re trained to go-go-go all the time.

It’s a reason some people text and drive… certainly, they can get more done than simply navigating their way somewhere.

I was thinking about this the other day while I was sitting in the Target parking lot’s “drive-up” slot #1 awaiting my order.

The order was not important, and it would not have taken me much time to just pop into the store, have some human interaction, and buy the four items I was getting.

Those items were one bottle of mouthwash and three sets of toddler flatware for our youngest daughter.

She’s not a toddler, but as a former “in the system” foster child she has some negative food habits, so we’re starting back at square one with “here’s how to eat in a healthy way” lessons that you’d normally teach a 2-year-old.

That’s beside the point, though.

If you’ve never been to one of these ‘order online, drive up and we’ll bring it to you’ places, the way it works is that you drive to the designated spot and then either text “I’m here” to a number on the sign, or in the case of Target, just have your app open and it detects when you’re there and the folks come out in a jiffy.

On this one particular sleepy Sunday afternoon when I was waiting for my Listerine, there was a woman in the drive-up slot next to me.

She was agitated at best.

She drove up just seconds before I did; I saw her as I entered the area because I was looking for the drive-up spots.

We hadn’t been waiting long.

Usually, when I’m waiting in line or like this… in my car, I close my eyes and practice deep breathing, but this time I decided to practice mindfulness with my eyes open.

(Take notes guys, these are all techniques to calm your brain continually…)

She couldn’t get her “drive-up” order fast enough.

The employee who came out to our cars was carrying both orders- each of us had small bags, though mine was bigger because I’d ordered the industrial-sized bottle of mouthwash.

My bag appeared to be much heavier than hers, and the employee came to my car first.

“Mouthwash and some forks & spoons?” he asked with a smile despite the cold light rain that was falling on him.

Just as I smiled back, said “Yep,” thanked him and accepted the bag through my opened car window, the woman in the other car tooted her horn.

It startled both of us because we were parked right next to each other.

She didn’t lay on it like a New York cabbie, but she tooted it in a quick staccato “beep-beep” fashion to grab attention.

She got both my attention and the employee’s attention.

As we quickly turned to look at her she threw up her hands and then pointed at her watch.

The Target guy looked back at me smiled, took a deep breath and said, “I hope you have a really nice day.”

I smiled back, “Thanks, you too- and hang in there… we never know what someone else is going through.”

As I put the bag of my purchased items in the passenger’s seat I heard the employee greet the woman kindly to her response of, “I was here before that woman.”

I didn’t hear anything after that because I rolled up my window.

How often do you do that?

The point is you can instantly reach a state of calm through intentionality.

When you find yourself starting to “heat up” see that as a stop sign and take some deep breaths – and don’t forget to learn how to breathe properly because it’ll help you more than you know!

I’m honored to help guide thousands of people worldwide in reaching a calmer and happier life.

If you’d like to explore what that would look like to you, schedule a session with me so we can discuss your personal coaching plan.