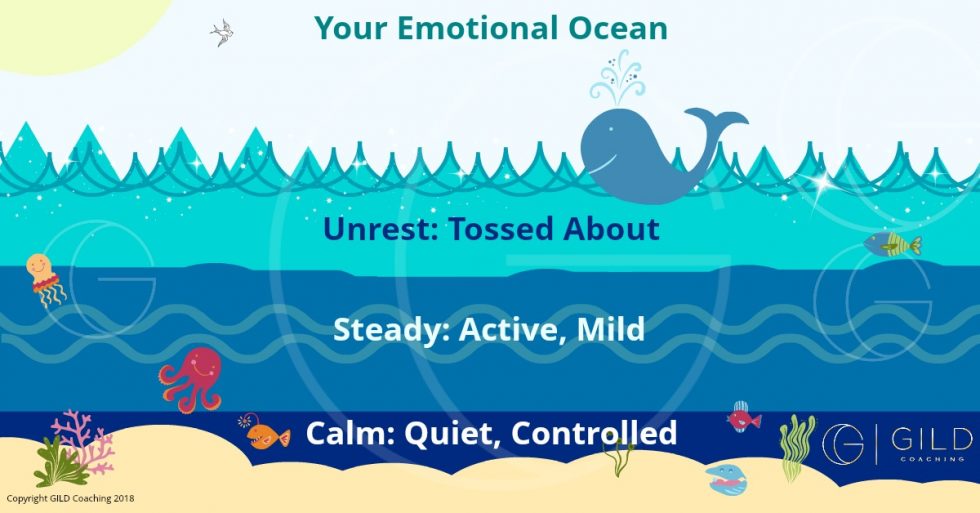 Your Emotional Ocean: How Deep Are You?

When clients first come to me for help, often our first conversation involves a lot of very fast speech. I listen to the person’s needs and their objectives, then ask questions to get a deeper understanding of how GILD and I can help improve this particular person’s life.

Nearly 100% of the time I have to ask the person to breathe… “Hold on – I’m hearing what you are saying but please do a favor for me and just take a breath…”  The reason that is a necessary component of the conversation is that while I can help (and do help) the person, it’s difficult to get to a place where I am able to help when he or she is in such a frantic state. The more the person describes her despair, the more upset she becomes.

This reminds me of the different layers of the ocean. We usually see just the surface of the ocean: waves pounding the sand, the swells crashing, the ebb and flow that is sometimes quite rough and even dangerous. What we don’t usually think about when we are seeing the chaos of waves swelling and smashing on our sea-level view is that just below that tumultuous layer lies an area where there is activity, which is more moderate, peaceful, and calm.

If you’re investing time in the top layer, you’ll be tossed about like a ship – or like a surfer who is overtaken by a monster wave. Is it possible to survive in that environment? Yes. Is it healthy to exist there as a general state of being? No. If you remain in that hectic state will you eventually drown in it? Probably.

What we don’t see is that next layer down… where the water is active but steady. In that second layer, fish can swim and be in more control than they would if they hung out farther up toward the light where the restlessness exists. For the fish, there are additional dangers such as being plucked from the water by a seagull or pelican. There are so many dangers in the upper level that most marine life chooses to stay below it as a general rule, only coming up if or when it’s absolutely necessary.

Below that active yet steady layer of life, there is another. This is the part of the ocean that is dark and calm. Yes, dangers exist there as well; however, in this analogy, we’re focusing on the calm of the water’s movement. If you’ve ever been scuba diving you’ll know that the temperature, light, movement, and overall mood in the deeper parts are just different. It’s calming. That’s because it’s calm. 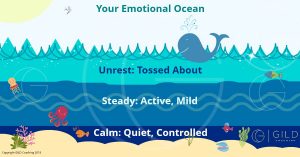 Looking at this from a life on the land perspective, we have our own emotional ocean. Those people who are calling me for the first time are on the surface during a storm. They have high waves, danger, crashing, and frightening circumstances – they’re desperately looking for a way out of the violence of their emotional circumstances. Their subconscious is exhausted from working overtime to keep them from drowning; they don’t understand why despite their best effort, nothing seems to help them get calm. Why?

Many years ago I was a lifeguard. I loved a job that had me in the sun next to the water and around people all the time. Most of the time it was uneventful. I’d show up, clean the pool deck and sometimes the pool itself, sit on the stand, blow my whistle and instruct children, “no running!” multiple times a day. When one wouldn’t listen from time to time I’d have to help bandage a bloody knee. Usually, that was about as exciting as it got, which was just fine with me. The lifeguarding day that provides the most vivid memory for me, however, was not calm at all. That was the day a child was in danger.

His mother was talking with a friend on the pool deck, and despite shouting for her to “watch this!” several times, the mom just kept chatting and left her son to play on his own. If the mom had been watching, she would have seen that what he wanted her to see was that he was about to jump into the deep end without his water wings. This child could not swim in the deep end. He seemed to grow tired of waiting for his mother to watch and decided to take the plunge. He jumped, and for a moment it was peaceful, but then the flailing started. This boy was fighting for his life – and as his guard, it was my job to jump to action, so I dove off my stand into the water and got him to safety. When I reached him he was still flailing – desperately increasing his speed of motion attempting to propel himself back up to the surface. Unfortunately, he was incapable of doing that because he lacked the skill to swim effectively. He ended up being okay; I got him out of the pool in time and though he coughed up quite a bit of water, left the situation with a healthy fear of the deep end and a tongue lashing from his inattentive mother (to whom I wanted to give a tongue lashing of my own, but I held my tongue instead).

When someone is being tossed about on the surface, it’s counterintuitive to be still and quiet. It doesn’t enter their mind to find a place of calm. When a person is being tumbled around, he fights for himself. Though it won’t get him anywhere, he flails and thrashes and lashes out. When I reached that little boy without realizing what he was doing he gave me a good beating for a few seconds until he realized the things he really needed were there: guard – buoy- air – safe – calm.

Those initial phone calls I have with people who want to be clients of GILD are much like that little boy or the surfer who’s found a wave just a bit bigger than he can handle. There are gigantic ups and downs – monstrous waves – so many and so large that the person cannot grasp the magnitude of them, and the depths are so deep that the person doesn’t stop to think of his options. Instead, he springs into action without realizing those actions are counterproductive.

The top of the emotional ocean is where a person lives when she is allowing herself to exist in a state of perpetual frenzy. She understands that’s not the place she needs to be, yet has no idea how to change it for herself.

Where are you swimming in your ocean? If you’re anywhere other than the calm, quiet, and controlled deep, you deserve a change. Schedule a free Exploration Session with me and let’s see what steps you can take to get you there. Life is too short to be tossed about, and putting it off will only make you lose time and hurt your health. Your time is now.