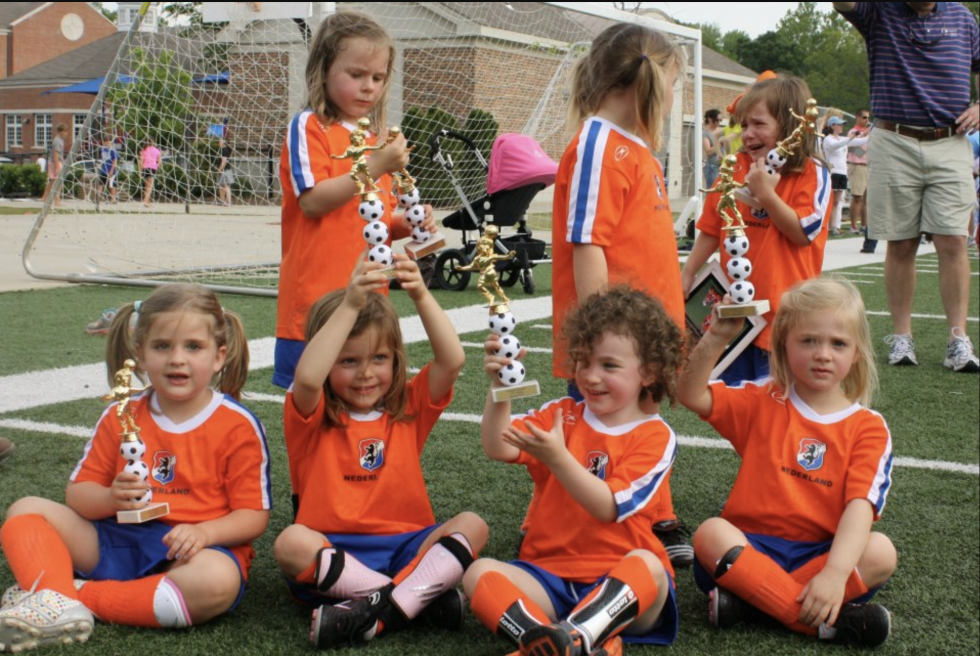 An Appeal to Parents: Everybody Gets a Trophy?

My daughter Holland has long since left her shin guards on the soccer field.

She has the heart and body of a dancer so… dance, she does.

But way back when in the all too competitive world of peewee soccer (which I just KNEW she would love because her Mama was one heck of a soccer player in the day 🙄) my daughter was on a team with some seriously athletic children.

They swept the cut-throat church league in which everyone was participating “just for fellowship and fun.” (Yeah… right.)

These kids didn’t only dominate during fall soccer – they killed all the competition for four straight years in basketball, too.

This was seriously a talented group of kids, and I’m not just saying that because my daughter was one of them; if another team had been this much of a force, I would have been seriously irritated and possibly would have asked for the “really talented kids” to be more evenly distributed to give other folks a chance.

But… of course, I didn’t do that because I was a parent on the “really talented kid” team.

Her first season was really fun for her – they swept the league and loved every moment of it.

After the last game, all of the families went out for a meal and the coach handed out the kid’s trophies and photos.

It was a celebration of champions.

Season two was more intense… the kids loved winning and kept it up.

At the end of the season this time, we did not have an off-the-field trophy dinner, but instead the coach handed out trophies right then and there.

These leagues usually have all teams playing at the same time on multiple adjacent fields, and this time was no different… except my daughter noticed something.

She walked over to me and with her nearly five-year-old wisdom said, “Mama – those teams did NOT win; we beat them.”

She frowned and put her little fists on her toddler hips. (…she is SUCH a mini-me!)

“That’s not fair. Why would I want the same trophy as everybody else when we won and they didn’t?” she asked.

What a great question.

What an absolutely fair and great question.

In recent generations, we’ve given a very unfair view of the world: everybody gets a trophy.

…and they grow up expecting that.

Yet, everyone does NOT get a trophy.

It’s at the third-to-fourth grade point where children stop learning to read and start reading to learn.

That’s about the spot where everyone stops getting a trophy.

That’s also the spot where kids start to fail.

That’s the spot where we see the educational system’s failures – that kids with reading comprehension issues (meaning they can’t learn or have high difficulty learning in any subject) have been passed through to the next level but can’t hack it.

I kick my kid’s butts at games.

Is it because I’m insanely competitive?

It’s because life doesn’t let them win so why should I train them to think it does?

Is this hard on them?

Sure, sometimes… especially when I beat them five times straight at Uno or Tenzi.

But, you know what makes it worth it?

The look on their faces when they do finally win.

…and the look on my daughter’s face when she beat me seven times in a row at Uno.

It’s okay to be hard on your kids.

Losing makes them grow… it makes winning so much sweeter.

Losing creates a hunger to do better and learn more – to develop skills.

So, the whole point of this is please… stop.

Stop giving everyone a trophy.

The winners deserve a trophy.

Beat the shit out of your kids at every game you play with them, and be a gracious winner.

And in the end… everybody wins.

Be a winner with us in the free GILDed Life online community – see you there!